Paper prototyping is a prototyping method where paper models are used to simulate computer and web applications. It is a simple method of drawing out designs to test how users would interact with a website of similar design.

Below is an example of a paper prototype for a pizza order website. It illustrates the process of the pizza order process. 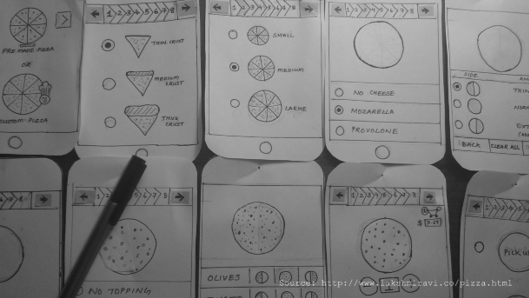 As a form of facilitated user testing, 3 users are recommended to test.

Testing aside, Nick Babich states that paper prototyping is useful throughout the project design- initially used to brainstorm ideas for the general product design, then used again later to decide on specific aspects of the design. It can also be appropriate to test these aspects before investing time into developing a functional prototype.

Before testing a paper prototype, it is best to do a walkthrough of the prototype with the project/design team to make sure it has all relevant aspects included. Essentially, the team identify parts of the prototype that still need to be created and outline all the possible paths a user may reasonably take and makes sure that all team members are on the same page with how the product interactions should work.

It is recommended to have two people present for a test session (not including the tester) who fill two roles:

The steps involved in developing & conducting a paper prototype test are as follows:

As a form of facilitated user testing, 3 users are recommended to test in iterative cycles.